You cannot live in North Carolina very long without learning about the state’s place in colonial pirate lore. The most famous privateer to prowl our coasts was Edward Teach (or Thatch), more commonly called Blackbeard.

In late 1717, Blackbeard attacked and commandeered the French merchant ship La Concorde. After dumping the frigate’s crew and cargo at Bequia, he renamed her Queen Anne’s Revenge. Almost 180 years later, in November 1996, the submerged remnants of Queen Anne’s Revenge were discovered under sand and a mere 25 feet of water near Fort Macon State Park. It is now designated as NC Shipwreck site 31CR314, which was added to the National Register of Historic Places in 2004.

Since then, salvageable items from Queen Anne’s Revenge have been recovered and preserved by the QAR Conservation Laboratory at East Carolina University. Items that have been cleaned and prepared are on display at the NC Maritime Museum in Beaufort.

Our children have been pleading for us to take them to Beaufort to see the artifacts for a while now, so we recently made the trek over to the coast. The following pictures are just a tiny sample of the items that are on display. Enjoy!

One of the two bells from Blackbeard’s flagship

Shot recovered from the wreckage

Several cannons have been recovered from the ocean floor 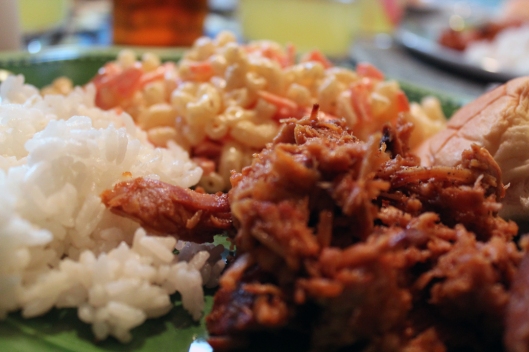 As she often does, my eldest daughter (Foodie Girl) had a dinner request the other day: “Daddy, can we have a summery dinner tonight… maybe something that reminds me of Hawaii?” How can a parent say no to that? Nordic Babe was completely on board with the idea and quickly procured some lilikoi juice.

I leapt into action and the resulting meal appears above; it was a Carolina take on Hawaiian plate lunch. (Side note: if you have never seen Sarah Vowell’s short meditation on the history of plate lunch, go check it out. Right. Now.) Yes, the expected sticky rice and mayonnaise-laden macaroni salad took up residence on our table. Pig was also featured, but instead of the usual kalua pig I substituted pulled pork BBQ in a tangy Western Carolina-style sauce. I thought about finishing the meal with hush puppies, but King’s Hawaiian sweet rolls won the day.

It was a hit with Foodie Girl and her siblings, Artist Chick and Zen Buddy. Washed down with a Longboard Island Lager from Kona Brewing Company, this was the perfect lunch-dinner for a summer evening.*

* Note: Due to the carb load, an extra 20 min. of interval training was warranted after consumption.

Another view from another aquarium. These dreamy jellyfish (Aurelia aurita) kept our children fascinated for about 15 minutes, hypnotically floating and drifting through the inky darkness.

Jellyfish are fairly common along the North Carolina coast. Our water temperatures are rising each year, causing their population to increase at a rapid pace. Appalachian State University now has a website (called Jelly Stalkers) dedicated to tracking jellyfish sightings along the NC coast; it’s certainly worth a quick browse. Their interactive map lets you view sightings by species or by month.

Capturing the delicate patterns and lacy tendrils in such low light required cranking the ISO up to 3200. I was worried about color noise in the image while I was shooting, but the result was better that I expected. The luminosity of the creatures let me keep the shutter speed at 1/125, which helped matters significantly.

Subcommandery of the United States

Rock makes the world go 'round… whisky makes it go 'round twice as fast.

What happens before and after the camera shutter is released! Read the stories, techniques and image workflow.